About Feminine and Masculine complex beauty.
This series was born from my personal research but also from a commission by a psychology and personal development event - the Feminine Masculine festival - to be held in Guadeloupe from November 29th to December 1st, 2019, organized by psychologist Valérie Scala. The exhibition will be entitled Feminine-Masculine, sublimated beauty.

Every day we expose our bodies or parts of our body (including our faces) to the eyes of the world. Selfies, videos and photos of us engaged in activities, doing sports, attesting to the swelling of a particular muscle after hours of effort, showing ourselves in specific outfits, with such or such hairstyle, makeup, accessories showcasing ourselves, enhancing our femininity or our virility. We expose them on social networks and thereby give those the right to dispose of our image, to modify it as a new voluntary servitude ... With the Recent popularity of the FaceApp application we allow individuals deep within Russia to distort the image of our face to impose our future aged appearance.
We transform our bodies through sports, cosmetic surgery or their images using photoshop or smartphones app filters.
The fashion industry produces the unreal model of an anorexic white teenager impossible to follow, as hagiographies once showed ideals of holiness unattainable by ordinary Christians. The pornography industry has also very recently formalized its female stereotype developed by the vote of 50,000 users of a website.

Since the Byzantine quarrel of iconoclasm, even since the myth of the cave, we have known that the border is tenuous between representation and the reality to which it refers, between the material image-object and the spiritual.

Historians now know that some of the iconoclasts’ reproaches to images were justified: some made images the godfathers of their children. Systems of pipes mystified the good Christian people by making milk drip out of icons of the Virgin ... the images had turned into idols, that is to say they had become their own model. On the other hand, the truth of an image is relational ... it never creates a form without content.
Today we offer pictures of ourselves to the worship of likes, thumbs up on social networks. What do they reflect if not our inner emptiness? We deceive with filters and software, but it only reflects our laborious obsession with appearance, to respond to our lack of self-esteem through external, social validation. In some ways, we conform to a stereotype and can only satisfy ourselves in the short term, between a few hours of life for a publication on Snapchat and a few days at most on Facebook.

This general submission to stereotypes, the fundamental question of self-esteem of course follows a particular declension in the Caribbean. The injunction is global including through the imagery of the tourism industry. However, we cannot ignore the influence of colonial and slavery trauma in our part of the world. We have been the field of the creation of racist stereotypes: classifications according to the proportion of "black blood", scientific justifications of races and their hierarchization. In photography, J. T Zealy's daguerrotypes for Louis Agassiz (1850) aimed to prove the inferiority of blacks. The models posed in the studio, shirtless ... black background, staring at the lens ... everything is very clear, as an object of scientific study should be and the humanity of the models is (at least) questioned in a kind of pornography matrix. The recent book "sexe race et colonies" shows well this strong link between colonial domination, racism and pornography - pornography that until today has ignored shallow depths of field.


Taking into account these parameters I have attempted to reach some complexity as a response to the stereotypes.


Complexity is not fragmentation or juxtaposition ... The Caribbean in many ways is a fragmented space, politically, economically, socially. It has been so since its "invention" by Europeans who have divided the islands and territories, have established separations, hierarchies within the indigenous populations, imported others. In many ways there is also a cultural and linguistic fragmentation, of identity in particular because population flows in the Caribbean are intense and incessant ... Saint Martin, where I live and work is a caricature. More than 60 nationalities present, strong wealth inequalities.... In addition, the destruction and psychological consequences by cyclone Irma in 2017 may have accentuated fragmentation or the sense of fragmentation.
Of course, globalisation is at work too. Therefore, we can see ourselves as fragmented beings.

It is also now proven that trauma can be transmitted from generation to generation through epigenetics.

In my view, the Caribbean photography and visual arts account for this fragmentation and the importance of historic legacies. I think of the special part played by collage or photo montage (Holly Bynoe of St Vincent, Terry Boddie of Nevis, Ebony G Patterson of Jamaica or Florence Poirier N'kpa of Saint Martin).
By complexity I mean to aim for a kind of unity, my subjective response to fragmentation and juxtaposition. Complexity would rather be the combination of the rearrangement into a single artistic object of the elements, legacies, influences of all the flows that cross the Caribbean. In my work, the diffusions, diffractions and irregularities obtained by the plexiglass screen and the spread water, create a kind of material that unifies the plastic space of the photograph. The differences in focus and the different densities of multiple exposures add to this effect as well as the play of colors, hues, white balance. All this aims to signal a distancing from the visible reality. I would then speak of representing a personal reality as the interaction between the body (mine, the model’s), the spirit (mine, the model’s) and the « activity of the universe ». It is a simultaneous experiment, an intermittent flow of sensations, of perceptions, of thoughts, of experiences. It is impermanent, elusive unless you take a picture. And yet we only catch a moment.
Through this series I try to express "realism of sensations and emotions, perceptions and experiences (...) realism of the perception of an (individual), not the object itself. (Bill Viola about five images for the millenium, 2001) ... it is a combination of several levels of perceptions (sensitive, spiritual, etc ...) to approach a complex reality that is the one that unites us.
In photography (to photograph means to write with light), the light and therefore the color unify. The link between color and the spiritual is well known (Kandinsky, Concerning the spiritual in art, 1910). So I try to integrate a spiritual reality beyond the simple bodies represented by the processes I have already mentioned and the references that can be seen in the figures of angels or Hindu goddesses, animist fetishes and even the Christ.

Finally, I like to think that my photography seeks to achieve complexity through poetry. This quote from the poet Jane Hirshfield comes to my mind:

Poems (and may I add photographs) can bring comfort. They let us know . . . that we are not alone (…) but they also unseat us and make us more susceptible, larger, elastic. They foment revolutions of awareness and allow the complex, uncertain, actual world to enter."
Thus a photograph can make us irreducible to any categorization, any stereotyped simplification. 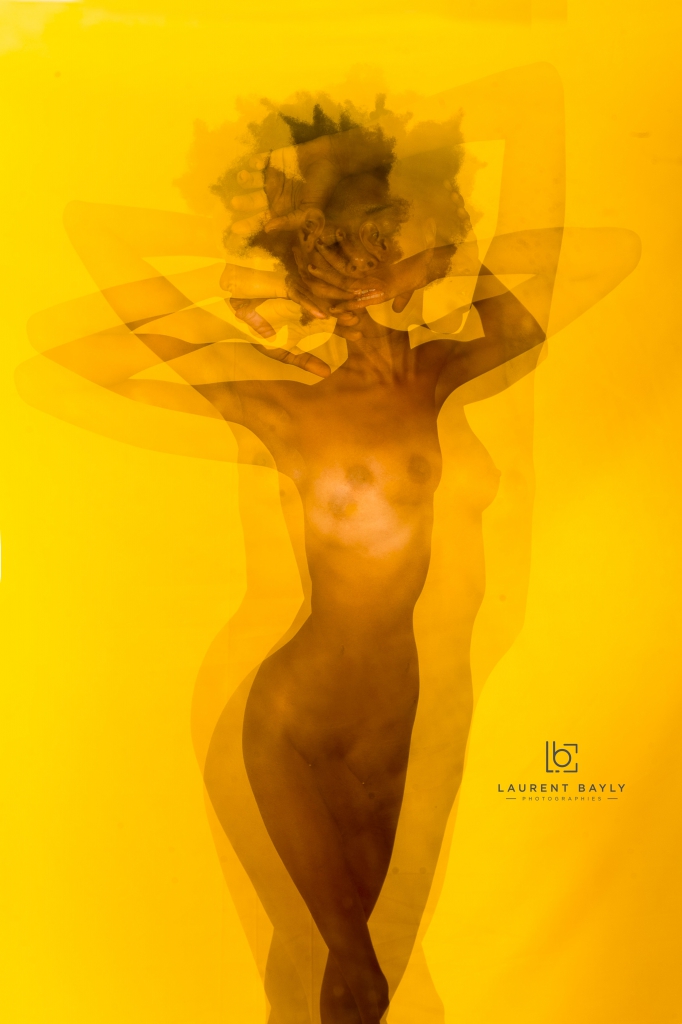